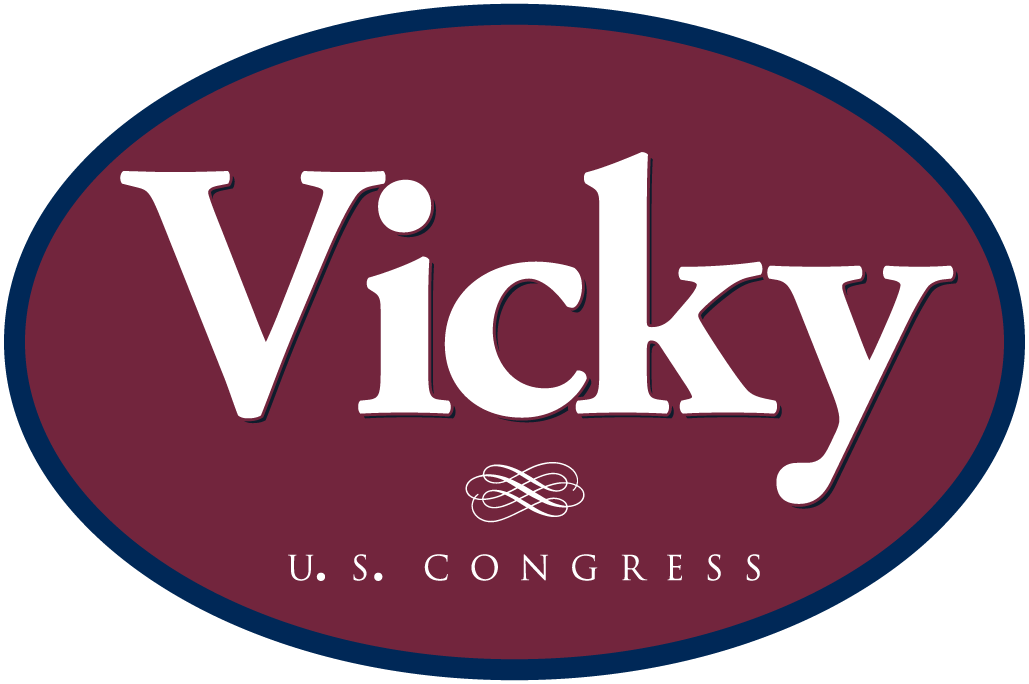 As a member of the U.S. House Armed Services Committee, Vicky has helped pass the National Defense Authorization Act annually. The law helps to ensure that service members and their families have the resources they need to keep us safe. Within this, Vicky has also worked to pass a bill as part of the Federal Aviation Administration that gives the Department of Homeland Security and Department of Justice the authority to detect and intercept drones being used by the drug cartels at our Southern border and in other areas where the public is in danger.
Vicky has also led the effort in Congress to secure additional Boeing Super Hornet fighter jets for our military.

Vicky is a passionate advocate for Whiteman Air Force Base, Fort Leonard Wood and a leader in national defense. She is also currently the Ranking Member of the Tactical Air and Land Forces Subcommittee which oversees all the acquisition programs for the Air Force, Army, and the Tactical Air assets for the Navy and marines as well as overseeing the National Guard and Reserves.

Vicky is a tireless advocate for our veterans. Making regular visits to Harry S. Truman Memorial Veterans’ Hospital in Columbia and veteran’s clinics throughout the district to monitor wait times and witness firsthand the level of care being given. She meets with, and listens to, the veterans she serves and is constantly working to be sure they are getting the benefits they have earned. Hosting her Veteran’s Resource Fair, Vicky assisted veterans with finding the services they need to continue their education, job training, and helping them navigate the healthcare system.

Vicky has also worked towards the passage of automatic maximum Service Members Group Life Insurance benefits for Gold Star families. Along with this, she has advocated alongside a Gold Star mother from her district who was denied the full amount of life insurance proceeds after her son was killed in Afghanistan due to a paperwork error.

As a former teacher who taught in Lebanon and Belton, Vicky cares about our students and believes they deserve the best education possible. They are our future. Vicky is committed to quality education for everyone.

Parents are the first and most important teacher in their child’s life. Parents know what learning experience works for their children. That is why Vicky believes education is best left to local schools and parents rather than the federal government.

As a former vocational teacher, Vicky understands the importance of educating students so they secure good jobs upon high school or college. Vicky supports the workforce development and often visits her district Career and Technical Education Centers to see what they are doing and support their efforts. She supported the passage of the major Career and Technical Education bill that gives more resources to CTE schools and encourages them to partner with local businesses to discover workforce needs and build their programs around the community needs.

Vicky has been on the front lines fighting government overreach when it concerns our natural resources. As our representative in Congress, Vicky has been a leader in fighting the federal land grab, like Waters of the United States, by co-sponsoring and passing a bill in the House of Representatives to stop this intrusion.

Vicky led the charge that created a bill to give the power to local residents and get big government out of the way by stopping the Federal Energy Regulatory Commission’s order to destroy 1,200 homes at the Lake of the Ozarks in 2012.

Vicky supported the gas and oil leasing program that allowed offshore drilling and access to an estimated 2.5 billion barrels of oil and 7.5 trillion-cubic feet of natural gas that lead to lower gas prices.

The 4th Congressional District is blessed with many rural areas that make Missouri a special place to live. Vicky has worked to ensure Missouri rural communities have access to the resources and services needed to ensure quality of life for those who live there. Vicky introduced H.R. 3242, the Expanding Rural Investment in Jobs and Infrastructure Act, which allows more community colleges, hospitals, technical schools, and other training centers to access federal funding for rural infrastructure improvements.  Additionally, she advocated for the repeal of the Waters of the United States rule, which would potentially put up to 99% of Missouri land under federal jurisdiction.

Approximately 60,000 jobs in Missouri were saved when Vicky led the effort to stop the National Energy Tax. Then, Vicky sponsored the bipartisan Small Business Credit Availability Act that rolled back federal regulations allowing small businesses to find the credit they needed to create new jobs. Vicky also voted to extend numerous tax cuts for middle-class Americans— allowing them to keep more of what they have earned which has resulted in new jobs nationwide.

Vicky fought for the passage of the Federal Emergency Management Agency (FEMA) Relief Improvement bill in response to the floods in the southern part of her district in order to increase reliability of FEMA’s services during disasters. Now applications for disaster assistance are given three times as fast and a representative of FEMA stays with an applicant over the life of the application to ensure continuity. They have also built new online tools to keep applicants informed about the status of their applications.

In addition to holding a Summit on Human Trafficking in Columbia to raise awareness of this issue and the need to act, Vicky sponsored The Empowering Law Enforcement to Fight Sex Trafficking Demand Act and, while it didn't receive the necessary votes for passage in 2018, it is a Bill she continues to fight for. If passed, it would open up additional grant funding opportunities for police to pursue those who solicit prostitutes.

Vicky and her team have successfully helped support several county Drug Recovery Courts, held a Summit on Drug Addiction in the District, and held multiple high school assemblies to encourage and empower our young people to be the generation to rise up and choose to live drug-free. She has also co-sponsored several anti-opioid bills, some of which have become law, and supported a State Targeted Response grant that the Missouri Hospital Association received which will enable hundreds of individuals battling addiction to receive the help they need.

Countdown to the 2020 Primary Election.